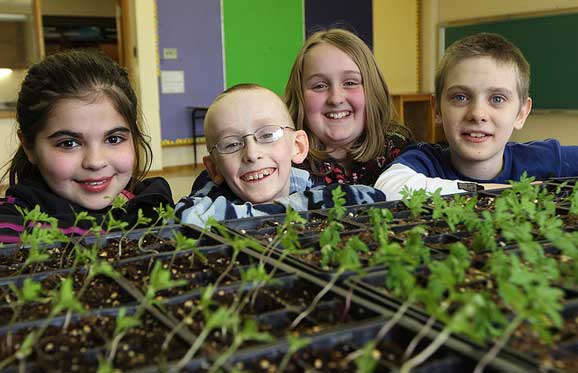 Centennial School students from left, Nyah Sahyoun, Andrew Craft, Tasha Gallant, and Charles Eldridge pose with some of the marigold seedlings students at their school planted. They will be taking part in Marigolds on Main Street this year where they hope to break the world record for most children planting flowers at the same time in multiple locations on June 6. Photo: Cindy Wilson/Telegraph-Journal[/caption]

SAINT JOHN – As school children kneel in the soil to plant marigolds along the streets of the Port City for a 16th year, they’ll also be part of an attempt to earn a world record.

“It’s going to give us a great confidence boost,” said organizer Barry Ogden, who had confirmed the project was eligible for a record this week.

“It’s such positive news,” he said, adding the team of organizers had been trying to think of ways to renew the spirit of the event.

On June 6 at 9:30 a.m. students from classrooms across Saint John, Pennfield, Sussex, Grand Bay-Westfield and Quispamsis will all head outside to plant their marigolds. Many of them have been growing the seedlings in their classrooms as part of a comprehensive project that teaches students math, science, writing, and community engagement.

Ogden said he expects to see the record beat easily, with more than 1,500 people participating in the Marigold Project.

The idea came from Greg Cutler and Mary Snider, who help co-ordinate the event.

“We needed something new to add some excitement,” Cutler said. “I don’t think we’ll have too, too much a problem beating that record.”

To apply for the record, it was a lot of paperwork and planning, Cutler said.

“It’s simple but it’s not easy,” he said. “You go online and read through to see what records are there to be broken.”

The group got official approval on Thursday.

On the event day, they’ll need people documenting the planting with video, images, and by counting the participants.

“We’re certainly going to achieve the goal,” Snider said. “I think it’s something the kids can really buy into. We are so proud of that project.”

When the project first launched 16 years ago, it focused on one school planting flowers along Main Street. The project has always aimed to help children – often from priority neighbourhoods – build self-esteem, confidence, and pride in their community.

“The Marigold Project is an inclusive project,” Ogden said. “It appeals to every child. It also makes kids feel good about their community and themselves.”

He added that the validation of a world record will amplify that aspect of the project this year.

“It’s extremely important how a child feels about themselves. It’s one of the most important things that there is,” he said. “Poverty is not just lack of materialistic things, it’s also how people feel.”

Ogden said he feels the Saint John community has all been feeling low, with a tough economy and high unemployment.

The record is as much a confidence booster for the community as it is for the children, he said. “This idea was created here,” he said. “And it’s ours.”

Want to join the discussion?
Feel free to contribute!

Now in its 18th year, The Marigolds Project has blossomed into community gardens sprouting up all over Greater Saint John.

Join us on June 4th at 9 am at the corner of Main Street and Landsdowne Avenue.